Why chicken combs fall over 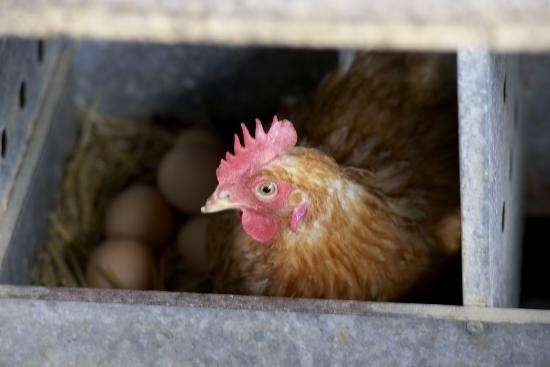 Sometimes our listeners ask a question that we decide to do a radio segment on. One of those came from a woman who became extremely concerned when the combs on her chicken’s heads started flopping over. Is this an indication that something is wrong with them?

Danny Thornton is an extension poultry instructor at Mississippi State University. He says in nature, a tall, bright comb will stand out and may be preferred by potential mates.

Blood also flows through it, helping to cool off the bird in hot weather.

The comb is made out of a soft, collagen tissue and usually stands up on the chicken’s head. However, he says there is a perfectly normal explanation as to why it would flop over.

“As a bird matures and gets older, and the comb gets bigger and it keeps growing, the weight of it just makes it top over,” he says. “As far as damage in the bird, I never have thought that when the comb falls over that it had any detrimental effects on the bird.”

He says an unruly comb could also have something to do with breed characteristics and genetic makeup of the chicken. Some combs are just larger than others. Thornton says he’s seen birds’ combs flopped over so far, they cover their eyes.

So, a droopy comb isn’t anything to be concerned about. However, other changes in its appearance could indicate an illness. One of those is called fowl pox.

“You’ll start seeing little pin-point lesions on the comb, and around the corner of their mouth, and their eyes, too, which is a virus,” says Thornton. “There’s a vaccine for that that takes care of it, so most of the time it’s not detrimental to the bird. The bird will develop a fever for a few days, and then most of them will eventually get over it, and they’ll be immune to it after that.”

Thornton says if a chicken’s comb looks healthy and normal, even if it’s not standing straight up, there is nothing to worry about.