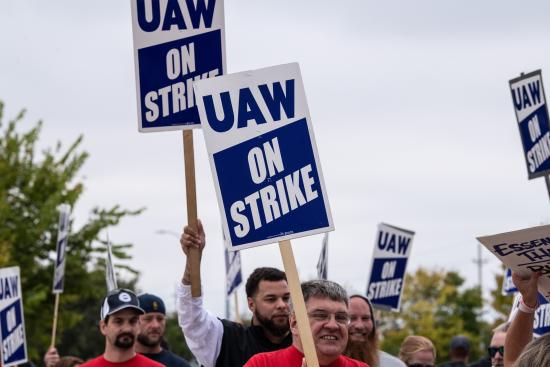 UAW members at CNH Industrial in Burlington, Iowa, and Racine, Wisconsin, are on strike for better pay and workplace benefits amid rapidly increasing inflation in the United States.

Nick Guernsey, president of the UAW Local 807, and a millwright at the CNH Industrial plant in Burlington, is representing around 450 members there. His plant is responsible for manufacturing combine harvesting headers for Case IH and New Holland, as well as tractor loaders, backhoes, rough-terrain forklifts, and crawler dozers for its construction brand.

“We want our members to make a decent living wage. We want to be able to retire with dignity and establish fair work rules within the workplace,” says Guernsey. “Vacation standards are another important factor for our memberships. We’re trying to turn back some of the overtime — we got guys living in this plant — and we want to be able to spend some time with our families.”

Wages aren’t competitive within other manufacturing jobs in the area, according to Guernsey. He also cites inflation as a source of concern for employees at his plant.

“Everything is going through the roof … you can’t buy a loaf of bread without almost needing to take out a loan right now,” says Guernsey. “Gas and the cost of living have skyrocketed with what is possibly no end in sight right now.”

UAW members are asking for parity in pay with non-union plants, which, according to Guernsey, are making considerably more money than union plants. Right now, the starting wage for an entry-level assembler at his plant is $19.26 per hour, and that would max out at $20.93 per hour at the end of a four-year growing period.

Guernsey says CNH Industrial won’t provide workers with hard numbers, but based on UAW 807’s research and discussions with other CNH employees, employees at non-union plants make $5 per hour more on average.

The previous contract between CNH Industrial and UAW workers expired on April 30 at 11:59 p.m. Following the expiration, workers and CNH Industrial were in active talks on hour-by-hour extensions. Guernsey says there was some movement between CNH and workers during early negotiations but contact ultimately dissolved May 1 in the late evening, and the strike was called at noon on May 2.

CNH Industrial brought in replacement workers a week before the contract expired so they were ready to go for the strike. “It was an almost seamless transition as we were walking out, they were walking in,” says Guernsey. Within two hours of going on strike, workers received an email that CNH was cutting their healthcare benefits as well.

Guernsey has told the members of UAW 807 to expect a three- to six-month strike, but things could end sooner depending on how long CNH Industrial is willing to pay replacement workers, and how well those workers can handle the plant.

“It’s a little disheartening for some of the younger members because they came in under the impression that Case was a really great place to work and they couldn’t wait to get here,” says Guernsey. “Now they’re kind of getting their eyes opened a little bit.”