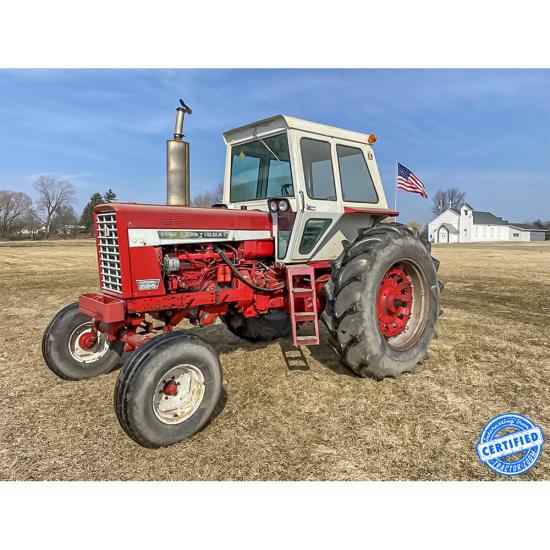 I was talking with an old friend from back home recently, and he’d mentioned that now that he was finished with the year’s batch of maple syrup, he was hoping to get to an auction soon. He’s kind of a serial tractor hound, so that didn’t really surprise me, but when he said that it was the retirement auction for VanSingel Farms, I perked up a little.

See, VanSingel Farms has been a part of West Michigan’s agricultural landscape for over 80 years. They’re well-known and well-respected vegetable growers, and only a half hour away from where I grew up. I hadn’t heard until recently that this past harvest was to be their last, as the VanSingel brothers had sold the operation and decided to retire.

This will be a pretty big sale, and I know it’ll be well-attended.

Before I forget, here’s the important stuff about the auction.

There’s a lot of equipment on this sale; 27 tractors, 6×6 army trucks, crawlers, pickups, irrigation pipe, tons of specialty equipment, and more. Also, I’d plan on getting there early.

The VanSingel family established a dairy farm about 120 years ago in Grant. Peter VanSingel, Sr., milked cows and as I understand it, grew a few vegetables on his land as well. About that same time, a guy from the Netherlands named R.E. Kincaid came to Grant and opened up a pharmacy. Among other things, he loved to hunt and fish around Rice Lake, a big 3500-acre marsh just east of town. Eventually he ended up buying most of the marsh and draining it. Kincaid realized that if he could drain the marsh, he’d be left with a huge tract of very fertile muck soil.

In 1935, Pete VanSingel bought a few acres of that muck farm ground from R.E. Kincaid and started growing carrots and onions. Shortly thereafter, Pete fell in love and married Grace and started a family, all the while continuing to expand the vegetable operation. By 1940, they were growing enough carrots that they began processing them on something of a commercial level (many of them went to Campbell’s Soup Company). Soon thereafter, as the VanSingel Farms operation continued to add land and the boys grew up, they began expanding their crop varieties. Over the years, in addition to the onions and carrots, they’ve grown corn, potatoes, parsnips, celery, cabbage, and peppermint! In the later years of the company, they settled on four major crops: onions, carrots, parsnips, and field corn.

When Pete VanSingel retired, his sons Cal, Stan, and Keith took over the business, and continued to expand it. Each of the three brothers played a specific role in the operation. Cal managed the yearly planting and harvest, Stan managed the spraying and weed control, and Keith managed the packing and marketing side.

Muck is a different animal. Furthermore, it’s pretty rare. Soil scientists estimate that muck soil only occupies a little over 1% of the exposed ground on the planet. In North America, you’ll find it mainly in the Great Lakes basin – Ontario, New York, Michigan, Wisconsin, and Ohio. It’s the richest black dirt you could ever imagine, and you can grow darn near anything in it. Where other soils have 3-5% organic matter content, muck has anywhere between 20-50%! Also, it holds in heat like you wouldn’t believe. It’ll warm up and be ready to go long before any other type of soil. As a result, it’s insanely fertile.

When I say muck is black, I mean it.

It’s not without its issues, though. It’s super-spongy, which means that if it’s wet, it’s like quicksand. If it dries out, turns to dust in a real hurry, and it’ll blow away. Erosion control is a challenge. To add to the challenge, because it’s so high in organic matter, it’s also decomposing all the time. Every year, there’s less and less of it. As a result, it’s not easy to farm. The upside is high, but moisture management is a full-time challenge.

VanSingel Farms owned about 1200 acres of muck, and like many other muck farmers, they tiled their land so that they could control the moisture as much as possible. Every summer, they’d hire high school and college athletes from nearby to keep the pipe moving. It’s hard work and the labor wasn’t always easy to find, but if you’re farming a giant black sponge, it’s part of the game. The same thing was true for weed control. During the summers, it wasn’t at all uncommon to for VanSingel Farms to have a crew of 40-50 people out in the fields pulling weeds. Veggies are pretty labor-intensive, and it’s all hands-on labor for the most part. The harvest crew was even bigger!

I’ll bet you can smell this photo.

You can’t farm muck with big equipment, no matter what you’re growing. It’s just way too heavy. Instead of 8Rs or tracked tractors, think smaller. 100-horse, lightweight stuff that won’t sink like a rock. There are 27 tractors on the VanSingel Farms sale, and not a one of them is rated for more than 117 horse. Furthermore, most of them are fairly old, too. Here’s a few of the tractors you’ll see this weekend. The VanSingels weren’t tremendously brand-loyal, so you’ll see a number of different makes on this auction. Each of these photos links out to the auction listings on Tractor Zoom; click ’em and it’ll take you there!

This is probably my favorite tractor on the sale. 826s are neat.

Here’s a few of their Fords. (Not pictured is a Golden Jubilee.)

This odd little crawler (which I’m fairly sure is a WD sitting on an Oliver OC-3 chassis) is pretty unique!

Army trucks for days! These are used like self-propelled gravity wagons. They all have live bottoms, and that’s how they unload back at the shed!

After last fall’s harvest, VanSingel Farms was sold to a neighboring farm operation, so Cal, Keith, and Stan could “retire.” I say that in quotes because if their history has proven anything, it’s that these guys stay busy. Cal, Keith, and Stan have all been involved in vegetable industry organizations, but they’re all very active in their community as well.

Cal’s side project is calling high school sports, and he’s done it for years. I remember listening to him on the mic on occasion at Grant Tiger football games! Now he travels all over the state with his partner in crime, Jon Russell (who announced for my high school back in the day) calling high school football and basketball games! They were both inducted into the Muskegon Area Sports Hall of Fame, too! Stan has held positions on the Michigan Carrot Committee, the National Onion Association, and was a past president of the Michigan Muck Farmers Association.
He’s also been a Grant township supervisor as well.

VanSingel Farms has definitely had a big impact on Michigan’s agricultural economy over the years. At one time, they were Michigan’s largest onion producer. The family has been honored on multiple occasions by the Michigan Vegetable Council; twice with the Master Farmer Award (Pete in the ’70s, and his sons in 2015) as well as the 2006 Distinguished Service Award. Here’s the video that the Michigan Farm Bureau created for the Master Farmer award in 2015.

The Keys To Success

If you were to ask any of them what the keys to success were for their operation, I know they’d tell you that it was faith and family – in that order. Their faith would speak for itself, but on the family side, the VanSingels have a great big family … their employees. At any given time, it wouldn’t be uncommon to find close to a hundred names on the payroll, and Cal, Keith, and Stan look at each one as family. “We’ve been really fortunate because our Spanish employees have been with us for thirty-plus years. The only issue there is that we are all getting old. The crew guys I have worked with for thirty-plus years stay because we treat them like family, and the way they want to be treated,” says Cal.

Hi! I’m Ryan, and I love tractors. It doesn’t matter if it’s a showpiece, an oddball, or seen its share of life … if it’s unique and it’s listed by one of our auctioneer partners at Tractor Zoom, I’m going to show it off a little bit! This equipment is all up for auction RIGHT NOW so you can bid on it. I think it’s cool, and I hope you will too! This is Interesting Iron!