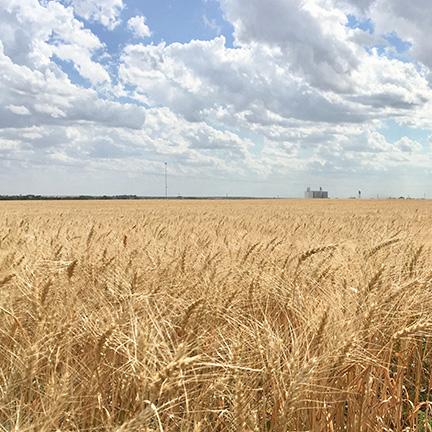 Kansas farmer Justin Knopf is nervous about his winter wheat crop. Drought, high fertilizer prices and market volatility all are challenges, but they are nothing compared to what’s going on in the other “Breadbasket.”

“Thinking about the people of Ukraine has evoked a whole new layer of emotion,” says Knopp. “I’m thinking of the families separated and the courage and tenacity of the Ukrainian people amid such hardship and challenge. I’m thinking about farmers in Ukraine and the reality of trying to operate a farm during this turmoil.”

Knopf says he always takes the responsibility of raising a wheat crop seriously, but he is wary of the impact that potential disruption of wheat acres in Russia and Ukraine will have.

“It makes the job of raising this year’s wheat crop feel more important than ever.”

Farmers in Ukraine grow winter wheat on a similar timeframe as in Kansas. They, too, should be applying fertilizer to their crop during this time of year, but will that wheat even be harvested or make it through the supply chain? Will spring crops like corn even get planted this year?

With the Russian invasion of Ukraine, basic supply and demand, in addition to numerous other factors, is putting the commodity markets into unprecedented instability.

The invasion threatens to upset global agricultural trade, as transportation decreases or halts in the Black Sea region.

“Ports and shipping lanes are being disrupted,” says Kansas Wheat CEO Justin Gilpin. “Customers are going to have to go to other sources to find that wheat, at a minimum, in the near term.”

With the uncertainties surrounding the duration of the conflict, it is expected that volatility will continue in the market and have an impact on world supplies.

The world consumes about 787.4 million metric tons (28.9 billion bushels) of wheat each year. With major disruption out of Ukraine and Russia, there could be a shortage in world wheat supplies.

“There will be some disruption with the infrastructure and their wheat harvest in that region,” Gilpin says. “This movement in the wheat market is unprecedented.”

This supply shortage from availability in the Black Sea region comes at a time when wheat in Kansas is just getting ready to break dormancy. Additionally, drier weather is forecasted into the spring. As of February 27, the Kansas wheat crop is rated 38% poor to very poor condition, 37% fair and only 25% good to excellent by USDA’s National Agricultural Statistics Service. There has been a downgrade in crop conditions across the United States due to drought conditions. As of March 1, the entire state of Kansas is experiencing abnormally dry conditions, with 73% considered moderate to extreme drought conditions.

“It’s a very important time with topdressing and spring planting in Kansas,” Gilpin says. “The U.S. has emerging concerns with the potential of a smaller winter wheat crop due to dryness. It’s a secondary reason that normally would keep commodity markets on edge. The southern plains winter wheat crop is breaking dormancy and in need of timely rains.”

“This extreme market volatility has led to wheat futures decoupling from cash markets, adding to the uncertainty growers and grain handlers are faced with,” he adds. “Producers are trying to offset the inflationary costs they’re dealing with on chemical and input sides. We already were facing some of the highest fertilizer prices and chemical inputs costs we’ve seen before this event transpired, but now with everything that’s unfolding, it’s just going to put that much pressure on production, not just in the U.S., but around the world.”

The costs and availability of fertilizer and other inputs have been at record highs since before this incursion. However, Russia and its ally, Belarus, are key producers of potash, which is used in the production of fertilizer. Together, they account for 42% of global exports of potash.

Natural gas, a top commodity for Russia, is a main ingredient for ammonia, which is also used in the production of fertilizer. While the United States produces most of its own natural gas, global price swings have a big effect on the U.S. fertilizer industry. This exacerbates the ongoing challenges farmers have had securing inputs.

Because of higher input costs and supply chain issues, the U.S. wheat crop may not get the fertility it needs to maximize yields, leading to decreased production, hindering its ability to meet worldwide demand.

As Knopf, who is president of the Kansas Association of Wheat Growers, fertilizes his wheat in central Kansas this week, he said, “This is an eye-opening reminder of how grateful I am and the importance of our ability here in the Heartland to consistently produce wheat and grains for the U.S. and world access year after year.”

“I’m even more mindful of the necessity of stewarding of our natural resources, and maintaining our infrastructure and access to science and technology — all things that enable us to be the most consistent producer of grain in the world,” he says.